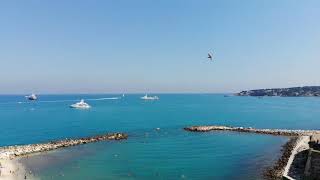 (Version française en bas de page) Apart from the hustle and bustle of the Old Town, L’Altro enjoys a beautiful setting across the harbour. Its terrace is the perfect place to admire the sea, the boats and the fort. The food is mostly inspired by Italian cuisine, with a wide selection of pizzas and pastas. However, I chose the beef fillet and it was absolutely delectable. My daughter and husband had the special of the day: quail with “ravioles” and morels. They totally enjoye
19 views0 comments
Alix

(Version française en bas de page) Dubbed ‘the biggest pleasure harbour in Europe,’ Port Vauban boasts 1642 berth places, also making it one of the largest marinas in the Mediterranean Sea. However, the harbour also has a rich cultural heritage and history, preceding the Roman Empire- and owes its name to the Marquis de Vauban who ordered the fortification of the port in the 17th century. Later, in the 20th century, Port Vauban also housed seaplanes, thereby commercially conn
18 views0 comments
Lauren

Dilbar is berthed in Antibes

(Version française en bas de page) Dilbar is the largest yacht in the world in terms of volume. At Port Vauban, you can recognize her by her size of course, but also by her characteristic off-white color. She was built in Germany and delivered to Alisher Uzmanov, an Uzbek-born Russian investor, in 2016. The features of her 3,800 m2 interior space remain a secret but you can see two helipads and a 25m-long pool outside. She has a capacity for 40 passengers with more than 80 cr
54 views0 comments

QUALITY APARTMENTS TO RENT IN THE FRENCH RIVIERA, BIARRITZ, AND PARIS